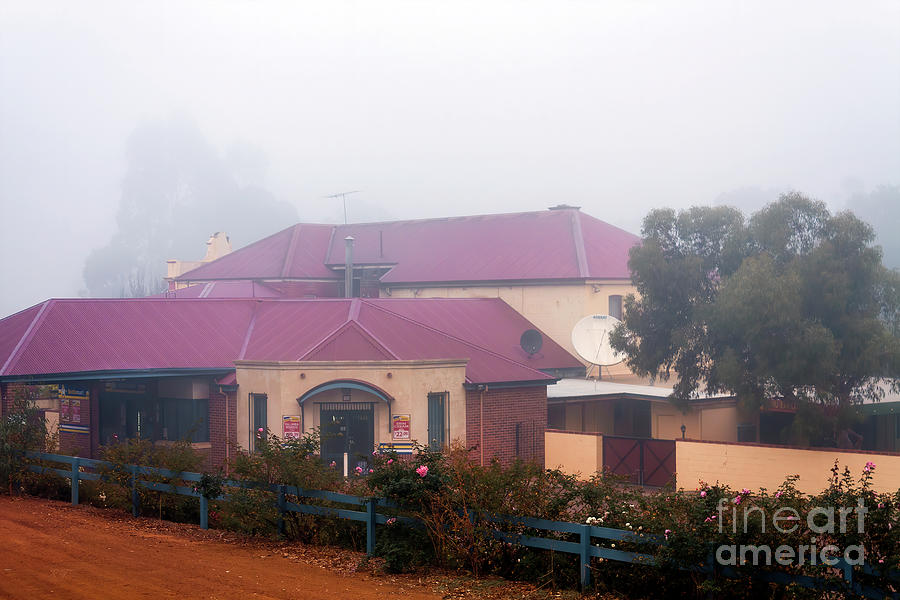 Henry Doust moved to Bridgetown after marrying his wife Elizabeth in 1872. He was a keen businessman, first taking management of John Allnutt’s ‘Kelah’ shop and residence in Hampton street and a few years later buying the land and building a general store, house premises and containing a ‘licensed premises’. According to his son’s account in the Blackwood Times in June 1950, the building was originally built as a store, however he always remembered it being a licensed premises. An early photo of the hotel with a band standing out the front, shows what appears to be the general store set back in the far left of the photo, where the main entrance to the current hotel and restaurant sits. The present building has the initials HJD and the date 1876 on the parapet, which refers to the initial establishment of the store with licenced premises on this site by Henry James Doust rather than the construction of the current two-storey building. James Scott took over the lease of the hotel c.1890. In 1908 Doust rebuilt the store and additions were made to make the current hotel as it stands today.
Mr. Doust was still the landlord of the Farmer’s Rest (otherwise known as the Farmers’ Home Hotel) in 1890, but newspaper reports confirm that the licence was taken over by James Scott in that year.
From 1893 there were separate references to Scott’s Hotel and the Farmer’s Home Hotel but, as later references to the Farmers’ Home Hotel continue to refer to Mr James Scott (and later Mrs Catherine Scott) as the proprietor, it seems likely that this was the same place.
Preparations for major additions were reported to be underway in December 1901, and these appear to have comprised a major part of the present building:
“Mr Warner, who has the contract for making the much needed additions to the Farmers' Home Hotel, was very busy measuring and taking levels, so it may be taken for granted that the building will be proceeded with at once. The plans provide for a two-storey building, at the corner of Hampton and Stuart Streets, where the billiard-room now stands. When completed the hotel will be a decided improvement to the town, and will add considerably to the accommodation for visitors which now exists.”
A photograph in the State Library of Western Australia dated c.1905, shows the current building facing the corner of Hampton and Stewart Streets, with the original two storey verandahs to both street frontages. The history of the town suggests that the major additions were a direct response to the increased demand for accommodation for visitors and travellers, in the years immediately after the opening of the railway line in 1898.
In 1915 the Farmers Home Hotel was sold under auction by Frank Chidzey, following the death of Henry Doust. At that time the one acre property (Town Lot 23) consisted of the brick, iron and stone hotel of around 30 rooms, a detached sample room (presumably for visiting salesmen) and a brick servants quarters. There was also a wooden wash house, an 8 stall stable, a 5 stall stable, harness and buggy room, loose box and a good well.
It was around that time the premises were purchased by the Scott family, who had managed the hotel since the 1890s. When Scott’s Hotel was next offered for sale in 1937 it was described as follows:
“Tenders are hereby invited by the Administrator of the Estate of the late Catherine Scott for the Purchase of the Freehold of the Hotel and Premises known as "Scott's Hotel," Bridgetown ….. The said hotel and premises include a two storey brick building containing about 31 rooms, including detached sample room and servants' quarters of brick, wooden washhouse, with bathrooms, linen presses, etc., one 8-stalled stable, 4 lock up garages, well of good water and two brick public lavatories …. The buildings have been recently repaired and renovated.”
It then came under the proprietorship of F.F. Scott, finally being transferred out of the family in 1950 when it was sold to Mr. G. Prenderville for £19,000.
The building has been altered several times, inclusive of the major extension to the Hampton Street frontage and the later removal of the original two storey verandahs.
This photo was taken in 2009.

Love seeing this beauty in the April 2022 Features thread of the No Place Like Home group! Bravo and l/f!