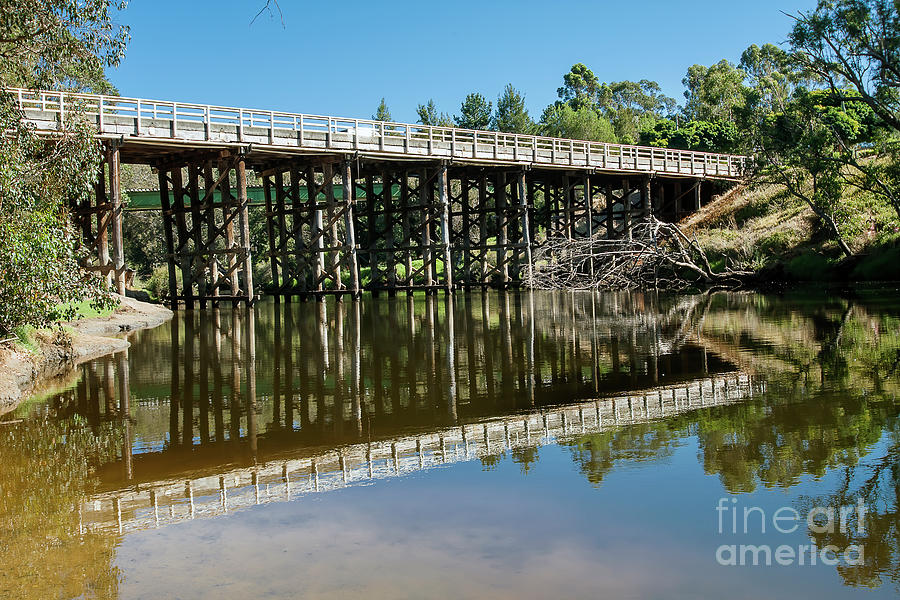 Bridgetown is a town in the South West region of Western Australia, approximately 270 kilometres south of Perth on the Blackwood River at the intersection of South Western Highway with Brockman Highway to Nannup and Augusta. Wikipedia

The first Blackwood Bridge, in proximity to Ford House, was constructed in 1862, under the management of W. Forrest (Lord Forrest’s Father), but was swept away by flood waters as it neared completion.

The second Blackwood Bridge was built at the very end of Hampton Street, with ‘Bridgedale’ and the original Police Station on the western side of the bridge. In 1881 a third, stronger bridge was built by GW Floyd of Bunbury using convict labour, again with Joseph Smith as foreman. This bridge also started at the very end of Hampton Street, but skewed slightly to the south-east.
The fourth bridge was built in 1936 under the management of Main Roads Department, at which time South Western Highway was re-aligned to its current position, as a continuation off Hampton Street at the junction of Carey Street, to cross the river on the western side of ‘Bridgedale’. This was the first of the bridges to be built using milled timber.

The fifth and current bridge was built in 1981, at a time when wooden bridges were being phased out. The northern point for this bridge is alongside the previous bridge, but was built angled to the south east. The remains of the pylons to Bridge No.4 can still be seen below the northern parking bay beside the bridge, when the river is low.
~http://inherit.stateheritage.wa.gov.au/

Thank you Jeremy for featuring this image in the 'WESTERN AUSTRALIA' group. 08/15/21

Thank you Miroslava for featuring this image in the 'Australia in Pictures' Group.