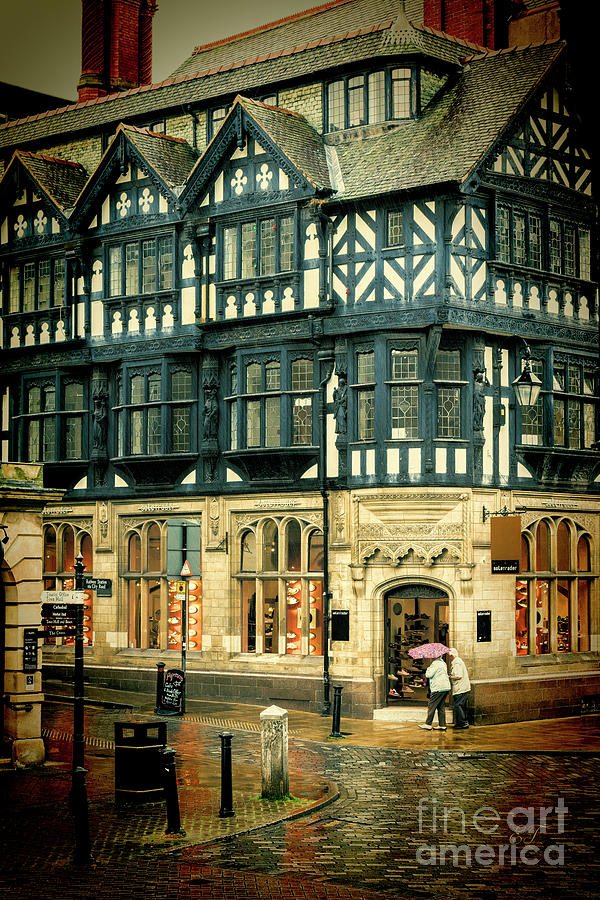 Chester lies on the River Dee, close to the border with Wales, and is the largest and most populous settlement of the wider unitary authority area of Cheshire West and Chester, which had a population of 328,100 according to the 2001 Census. Chester was granted city status in 1541.

Chester was founded as a “castrum” or Roman fort with the name Deva Victrix in the year 79 by the Roman Legio II Adiutrix during the reign of the Emperor Vespasian. Chester’s four main roads, Eastgate, Northgate, Watergate and Bridge, follow routes laid out at this time – almost 2,000 years ago. One of the three main Roman army camps, Deva later became a major settlement in the Roman province of Britannia. The Roman Empire fell three hundred years later, and the Romano-British established a number of petty kingdoms in its place. Chester is thought to have been part of Powys at this time. King Arthur is said to have fought his ninth battle at the city of the legions and later St Augustine came to the city to try and unite the church and hold his synod with the Welsh Bishops. In 616, Æthelfrith of Northumbria defeated a Welsh army at the Battle of Chester and probably established the Anglo-Saxon position in the area from then on.

In the late 7th century, (AD 689) King Æthelred of Mercia founded the Minster Church of West Mercia on what is considered to be an early Christian Site and known as The Minster of St John the Baptist, Chester (now St John’s Church) which later became the first cathedral. Much later the body of Æthelred’s Niece, St Werburgh was removed from Hanbury in Staffordshire in the 9th century and, in order to save its desecration by Danish marauders, she was reburied in the Church of SS Peter & Paul – later to become the Abbey Church (the present cathedral). Her name is still remembered in St Werburgh’s Street which passes alongside the cathedral, and near to the city walls. A new Church dedicated to St Peter alone was founded in AD907 by the Lady Æthelfleda at what was to become the Cross

The Saxons extended and strengthened the walls of Chester to protect the city against the Danes, who occupied it for a short time until Alfred seized all the cattle and laid waste the surrounding land to drive them out. In fact it was Alfred’s daughter Æthelflæd, Lady of the Mercians, that built the new Saxon burh. The Anglo-Saxons called Chester Ceaster or Legeceaster.

In 973, the Anglo Saxon Chronicle records that, two years after his coronation at Bath, King Edgar of England, came to Chester where he held his court in a palace in a place now known as Edgar’s field near the old Dee bridge in Handbridge. Taking the helm of a barge, he was rowed the short distance up the River Dee from Edgar’s field to the great Minster Church of St John the Baptist by six (the monk Henry Bradshaw records he was rowed by eight kings) tributary kings called ‘reguli’.

Chester was one of the last towns in England to fall to the Normans in the Norman conquest of England. William the Conqueror ordered the construction of a castle, to dominate the town and the nearby Welsh border. In 1071 he made Hugh d’Avranches the first Earl of Chester.

Chester has a number of medieval buildings, but some of the black-and-white buildings within the city centre are actually Victorian restorations. Chester is one of the best preserved walled cities in Britain. Apart from a 100-metre (330 ft) section, the listed Grade I walls are almost complete.

The Industrial Revolution brought railways, canals, and new roads to the city, which saw substantial expansion and development – Chester Town Hall and the Grosvenor Museum are examples of Victorian architecture from this period.